Julia Anne Rowe ([email protected]) is a railfan. I knew this about her the day I noticed the Pennsylvania Railroad logo tattooed on her arm. It never occurred to me until much, much later that she was also in a very serious relationship with the Reading Viaduct. To say more is unnecessary. Her photos and her prose tell the story.

Thank you, Julia, for having the bravery and honesty to share this account with the denizens of Eraserhood.com; many of us share your views, and I think we all need to at least consider them. This is a neighborhood that needs a balance between progress and preservation in order to move forward without losing the stark beauty we love. 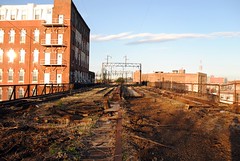 My introduction to the Reading Viaduct was in a car passing underneath the stone bridge over Spring Garden Street when I was about ten years old. At the time I had little knowledge of what it was past it being railroad related but I knew I wanted to know more. I spent years wandering the streets and alleyways around the viaduct staring up, learning the curves in the line and planning trips up to the top that never seemed to pan out. Almost twenty years later I finally made it up a wall and an embankment to the rails with my friend John. It was everything I had imagined it to be and more. I was in love.

The right of way had been claimed by nature, rails surrounded by plants, what was left of the railings were rusted and covered in graffiti, the surrounding buildings seemed to be a part of the desolation even if they were occupied. The emptiness and the silence of being up there created a welcoming distance between us and the city below. That first trip up to the viaduct we walked from Buttonwood north to the end of what’s left of the viaduct at Fairmount and then south to Arch. All the while, stopping to take in the vistas that were offered up to us at almost every intersection below us. I was smitten with it and since that first visit two years ago I’ve been up there at least thirty times. 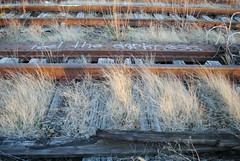 The viaduct was built as part of the Philadelphia & Reading Railroad or the Reading Railroad as it was commonly known. The four track viaduct for the 9th Street Branch was opened along with the Reading Terminal in 1893 from the terminal at 12th and Market Streets to Green Avenue with the remaining tracks descending at Fairmount Avenue and continuing on to Wayne Junction in Germantown. The elevation of the tracks to Wayne Junction was finally completed in 1911 and all passenger traffic in the city is run along that branch opening up the City Branch for freight traffic. After declining ridership The Reading went bankrupt in 1971 and was later absorbed by Conrail 1976 with passenger service ending in 1981 and the Terminal closing its doors in 1984. SEPTA still uses a majority of the Reading lines for it’s Regional Rail service. Since the trains stopped running the viaduct has been left to decay and slowly become its own little ecosystem and world above a neighborhood left to hang after industry closed their doors. 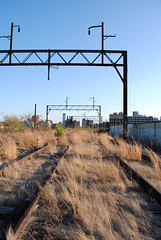 In the wake of the lines abandonment a variety of plants and trees have made the viaduct their home, ranging from the average, yet beautiful, to the exotic. Prairie grasses seem to flourish and even a Magnolia grandiflora tree has taken root on the viaduct. The diversity of the plants change as you make your way along the viaduct, from small plants and shrubs with a few trees here and there from Arch Street to just after the abandoned Spring Garden Street Station, to the miniature forest that grows at the end of the platform at the station to the prairie grasses that dominate the end of the viaduct up around Fairmount.

Residents of Philadelphia and some visitors to our city have continually found uses for it. From the art installations I’ve stumbled across, to swings, see-saws, some really fantastic street art to some really bad graffiti. I’ve come across art students drawing or painting the sky line, amateur & professional photographers wandering about, railroad history buffs walking the line, neighborhood kids wandering about in awe, homeless people finding a safe shelter, graffiti artists finding a quiet place to go about their work and once I stumbled upon someone smoking crack. It’s not a place that been completely forgotten, it’s been organically growing since the railroad walked away. People frequent the viaduct in hopes to leave their mark and be part of this small seemingly forgotten part of the city. 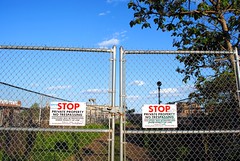 There is a great opportunity here in Philadelphia to turn what is left of the Reading Viaduct into something usable by not only residents of the city but by tourists. Sadly, the Reading Company began the process of removing the rails at end of March this year. In order to prepare the site for the rail removal the grasses are being cut and the trees removed revealing a Martian landscape waiting for new life. It’s heartbreaking to see the destruction and desolation left in its wake. I would love to see this space used and loved by not only the citizens of this city but also by the many tourists that come to our fair city year round. Yet the precarious balance of making this park work and still retain some of its ‘natural’ beauty has me feeling bittersweet about the project. 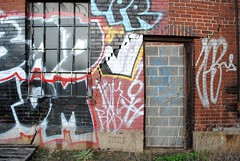 If one has visited the High Line Park in New York City you may have an understanding of the lack of spontaneous creativity, it’s very rigid, planned, static and sterile. In my experience the park staff members I’ve interacted with have been very unhelpful, rude and so by the book and by the rules that it’s really taken a toll on the overall tone of your visit. There are plenty of places set up for viewing the city around you, but some of them feel too forced. There is a lack of native street art and graffiti, which makes it feel too cleaned up and even far removed from the natural desire by locals to leave their mark. To me there are moments that it feels too planned it’s like an amusement park or a large interactive art installation. I appreciate the effort, thought and energies put in to such things but I also appreciate the natural flow of unexpected street art, graffiti, vistas and plant life. 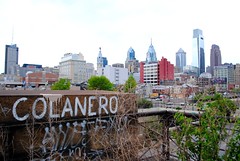 Cities and parks need a plan but they also need to have the ability to spontaneously change, to be dynamic, and to be able to grow with limited constraint. With the High Line I don’t see much of this being a possibility and I feel this will be lost with any park that is built on the viaduct. The cost of a project like this will be monumental but it seems that more and more people are becoming supportive of it. A major issue that has people concerned is the polluted soil (think arsenic) that the viaduct is filled with. Removing that soil is a huge project, capping it would be a simple solution but would completely destroy so many key elements of the space. So where does it go from here? We’ll have to wait and see. 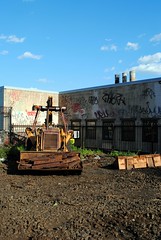 I personally am left in the middle as I want to see the space used and appreciated but I also feel that the park will destroy the magic that is the Reading Viaduct. That’s my opinion and I hope I’m proved wrong when it eventually becomes a park. Until then I’ll continue my trips up to take photos of what I love most about it, the organic decay that has been taking place since the trains stopped rolling along.

Bob Bruhin is a web developer, tour guide, art photographer, author, blogger, and graphic designer. His love of urban landscapes, especially in post-industrial Philadelphia, PA, leads him to document some of the darker corners of his city.

This site uses Akismet to reduce spam. Learn how your comment data is processed.